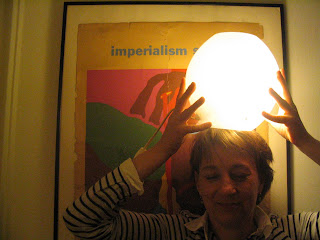 What happened when in 1982 an ex-roommate from Holland told her best friend to come visit New York because we had a ton a space for guests:

January, 1982: Best Friend sits next to Strange Young Woman on plane and tells her "Oh I know a place you can crash at in New York."

Best Friend and Strange Young Woman show up at apartment after wild party. Beds made, pizza offered, party continues. Strange Young woman corners me as I make up guest beds and confesses she just met Best Friend. I think, "Oh God, we have a serial killer in our house.""

We become great friends. I leave the United States for the first time and visit Strange Young Woman in Holland. I also find out they have toothpaste and toilet paper too.

One day it is not 1982 anymore. It is 2009. She is no longer the Strange Young Woman. She is family and it is 27 years later. From that one accidental meeting on a plane and her accidental stay at this home, my life became irrevacably changed and forced onto the road of its destiny.