For Mimi Who Insists Idealism Win:
An Encore of When This Was Normal

This is Bernie talking New York to New York about reclaiming America for Americans.  ALL Americans. 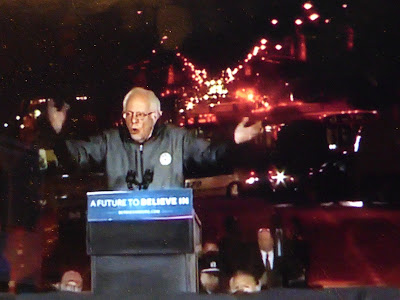 This is New York's primary day.

So whoever you are voting for - I DON'T CARE -- WE LIVE IN A DEMOCRACY SO JUST FUCKING VOTE! - GO VOTE!!

Here's why I am voting:


This was not only or just or always luxury housing.

It is now.  Because something this beautiful is now only afforded by lots of money. 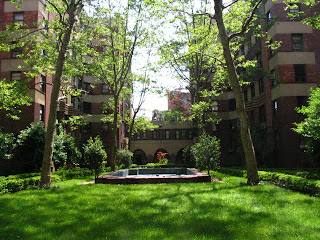 Nowadays, you don't see this kind of place filled with the people I grew up with.

But back then, it was where the guys working at the post office lived. My neighbor's dad was the short-order cook at Kozy Korner and then a maintenance worker at one of the buildings (that's the guy who does all the dirty work the super tells him to do).

The two sisters on the other side of the courtyard were secretaries, not administrative assistants. Secretaries did everything too, just got paid less and were called "the girl" more.

My father, Seymour worked his way off the retail floor by getting a Masters in Business at"NY-Jew" night school.  (Back then NYU was one of the few big universities to let Jews in so everyone called it NY-Jew.)

That Masters in Business, like the housing we lived in, was not a luxury item. That Masters was affordable too.  My father did not spend the next 30 to 40 years paying off student loans.  (I only have $25,000 to go!)

This was not an expensive view. 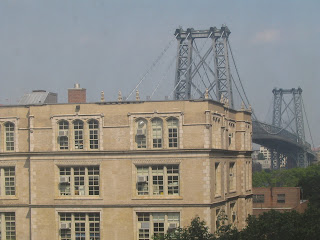 But then, it was just my grade school.  Florence would stick her head out the window and yell down to me when to cross Columbia Street.   Depending on who you talk to, that school sucked (friends) or was normal (me).  I was just glad I was taught how to read without switching up everything and that I survived every fist fight I found myself in the middle of.  Honestly, I didn't think it was such a big deal.  It was... just normal.

These days, it's a great school.  It has computers.   I don't think they have fist fights anymore.

This is now a edgie view.  Meaning that now that this comes with luxury housing, you also get a bit of industrial and street edge too.  On the other side are the city projects.   They are still not luxury housing. 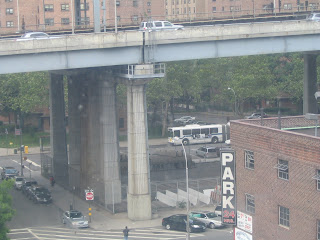 I wonder how many new folks cross to the other side of the bridge and wander up Columbia Street.  Maybe they do. 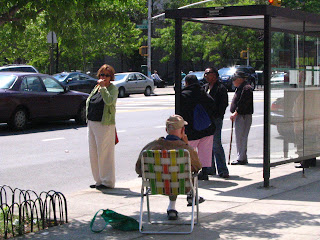 Didn't use to be.  Used to be just.... normal.  Because this is how everyone sat in the sunshine.

Not sure why my family didn't have lawn chairs.  Maybe because Florence was always practicing and Seymour was always reading.  When I hung out with my friends, we sat on the steps.

Even when the steps were as far as Florence could go, we sat on the steps. 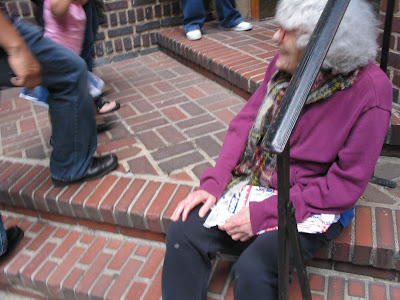 Then it became luxury housing and lawn chairs were banned.

Six decades of people sitting on the steps of their buildings or in lawn chairs and suddenly it was too low-class to have a lawn chair out in front of the building to enjoy the green grass and the fountain.

At that point Florence sat in a wheelchair. 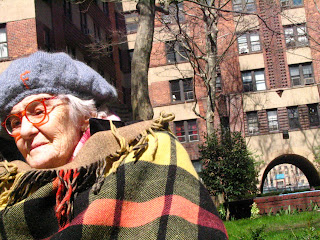 Even the maintenance guys made sure no one fucked with us.

I miss sitting on stoops and running past old ladies in lawn chairs.

I miss it being normal for post office guys and secretaries to have beautiful gardens outside their front door and sky outside their windows.

These days listening to fucking assholes hate hard-working Americans like my parents and my grandparents who were immigrants I really miss my mother.

I miss normal.  O.K. not the fist fights because they really did suck.  But the normal where anyone who needs a good apartment is able to get a good apartment.  I want the American Dream to not be a winning lottery ticket.  I want it to be a great job that pays well, has real health insurance and allows whoever the fuck wants to to be able to go to college and not have to still be paying it off 30 years later.

I want normal back.

So, fuck it all to hell.  I'm voting Bernie.


In Memory of Cindy: The Land of the Quartchyard