Sunday Memories - The Writing On The Wall 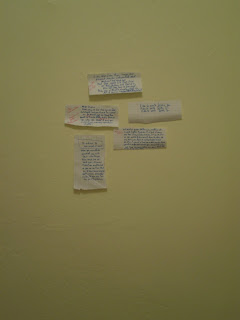 But there were things we were allowed to do, the things that other kids never got to do. And one of them was writing on our walls. Given chalk or pencils or crayons or even pen, our walls by our beds became tomes of our lives. My sister, when studying Russian at Hunter High, wrote Yopt tvayah matz a lot, especially when she was mad. It means motherfucker. I didn't know Russian so I wrote motherfucker but disguised the letters into boxes and circles so you couldn't tell. Regardless of what we wrote, it was ours and never did I find my canvas of private musings erased or washed off. Never was I censored.

Decades later in my own and suddenly empty home, without thinking, I one night started scrawling on a wall words and rage and desire and pain and the section from Twelfth Night where my name came from.

Make me a willow cabin at your gate,
And call upon my soul within the house;
Write loyal cantons of contemned love
And sing them loud even in the dead of night;
Halloo your name to the reverberate hills
And make the babbling gossip of the air
Cry out 'Olivia!' O, You should not rest
Between the elements of air and earth,
But you should pity me!

That night I was just trying to remember who I was, which was hard because the last time that happened it was 1961 and I was still pre-verbal. The scrawling and uncovering got lengthy, and day after day the words took over more and more of the wall.

Eventually some sense of self returned and I hired a friend to paint the room. When confront with a wall now chock-full-of-ranting, begging and pleading to someone divine to make something anything better, my friend said nothing. But I did notice that uncomfortable squirming men do when you inadvertently reveal emotions and they just want you to be their friend they occasionally fantasize about fucking.

The new paint and the new life unfolded into more new paint and more new life and then again, even more new paint and new life. And as each coat of paint went on the walls, life offered, like an onion layer peeled back, knowledge and I'd be revealed again and again to who I was and what I felt or thought or saw or experienced. But nothing went up on the wall. The paint jobs were too nice and besides, I felt too embarrassed to let anyone living with me in on what was going on inside.

Until one night, recently. In a suddenly empty home, my newly painted walls of sweet bright hope spread open wide and welcomed me, just like before, to not know who I was or what I was all about. Without even thinking about it, little sweet notes of brutal existence once again found themselves up on the wall.