The last in a series of encore posts and new work from Guest Artist Dana. 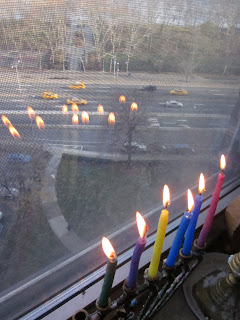 It had been years because the menorah had been up in a closet and Dana couldn't reach it. This year Ping brought it down. The miracle of a helping hand.

Dana couldn't remember if there were candles but Ping found the two boxes Dana had tucked away years ago. Another miracle.

I was able, after weeks of work, to come visit. Miracle!

And then Dana sang the bruchas and for the first time in years, miracles of miracles I got to celebrate the Miracle of Lights.

Of course neither of us could remember the words to Rock Of Ages but the miracle of joy at sharing the holiday together unfolded instead.

Rock of Ages let our song,
Praise thy saving power;
Thou amidst the raging foes,
Wast our shelt'rng tower.

The Eight Days Of Miracles

Once the Maccabees had regained control they returned to the Temple in Jerusalem. By this time it had been spiritually defiled by being used for the worship of foreign gods and also by practices such as sacrificing swine. Jewish troops were determined to purify the Temple by burning ritual oil in the Temple’s menorah for eight days. But to their dismay, they discovered that there was only one day's worth of oil left in the Temple. They lit the menorah anyway and to their surprise the small amount of oil lasted the full eight days.