As this week begins Exodus and welcomes Resurrection, a post of 2010 on prayer. 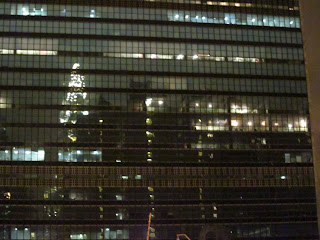 In the trenches, everyone had to figure out how they were going to pray. This being New York, there were many versions to pick from just in case you couldn't do the old white guy with the white beard up on a white cloud.

For a while mine was a hand on a doorknob. Somehow that seemed to opened me up to hope that the war, both within and without, would end.

This guy said his was always the Chrysler Building. He could always look up and see a beauty of lights.

Decades later, the hand on the doorknob often got dimmed by worry and fear. But with so many glass building crowding the sidewalk, I found myself catching glimpses of a beauty of lights, remembering that however I understand it, there was a greater expanse awaiting me. I just had to look up.
Posted by c.o. moed at 12:01 AM 3 comments