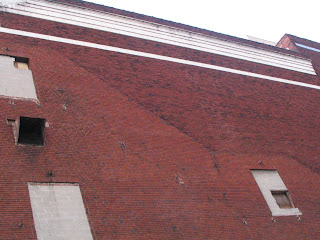 We didn't call it LOW-SSSS like it was some royal palace. We called it LO-EASES. Because that's how you really say LOEWS.

This one was on Delancey Street. So we called it DA LO-EASES DELANCEE (as opposed to the one on Grand Street and Essex which was smaller).  And it was no royal palace.  It was a beat-up movie theater with a tattered lobby.

On the rare occasion Florence took me along in one of her infrequent escapes, it was understood I was not to bother her or remind her of her current life as mother/wife/piano teacher. I was to be a silent witness.  So when I panicked at "COMING ATTRACTIONS!” I tried to be really quiet about it. This was her time and I now wonder what movie I really watched - the one on the screen or the one sitting next to me.

Who knows what lives inside DA LO-EASES DELANCEE these days…the neighborhood spouting up luxury housing, the street level filled with cheap stores and cheaper national chains.  Any hint of a movie theater has been obliterated. But ghosts of those stairs are still there, etched into brick, holding memory of a rakish girl sneaking in to see a pitcha.