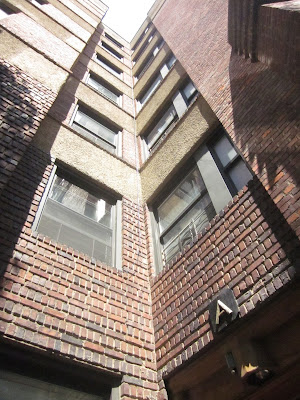 It's been a never-ending fog of mugginess and loss, each day another announcement of 100-year old businesses vanquished by high rents and neighborhoods disappearing into someone's idea of an exclusive playground.

Too, it's been a time of slowly saying goodbye to Her New York as things get packed up in one old home and a new home rises from the ashes of failed attempts.  In the rushed wanderings, I kept looking for something that called out a city everyone wanted to live in so that they could become themselves.

And yeah, I could have walked down from the fifth floor which was really the sixth floor and knocked on her door, but usually I just ran down all the stairs to see if she and B were already there in the courtyard. If they weren't, then our version of cell phones took place.

We'd look up and shout "Cindy" or "B" and someone would stick their head out the window and shout down, "I'm coming down" or "I can't I gotta do homework" or "she's not here".

We all shouted up and we all shouted down, our noise filling the courtyard day in, day out, even when we were teenagers and our idea of 'playing' was sitting around in blue eye shadow and sulking or walking the rim of the courtyard talking of God and marriage.

These brick are mamalochen, for the minute I looked up a call came to my lips, the name of a friend now dead a few years or the other, a grandmother in New Jersey.  But the courtyard is now politely quiet, silence being an important selling point for apartments no longer considered homes but luxury housing.  And I think, well then when you look up all you're gonna see is brick, not your New York.

Sunday Memories: Part One: Cindy: That Day We Met

Sunday Memories: From That Moment On Life Was Different

Art Is Where The Home Is