Sunday Memories: When She Wore A Winter Coat 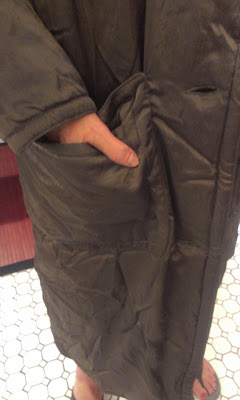 On the Avenue A bus, Florence was known as the lady in the sweater.  That's because once the marriage was over, she never wore a winter coat again.  No matter how bitter it got, how low the thermometer dropped, how hard the snow snowed, Florence wore a sweater and an old scarf.

Years of yelling into the phone to her that it was cold outside, she was sick and it was fucking us all up when she didn't take care of herself had no effect whatsoever.

Maybe in her sixties, definitely in her seventies, she started teaching piano lessons in people's homes.  Barely charging more than $20 most times, she trudged from apartment to apartment, up stairs, up elevators, past doormen or just buzzing intercoms, a bag packed with xeroxed piano tunes that aimed not to teach the classics but entertain young children usually less enthusiastic about the piano than their parents, thrilled to be getting a seemingly harmless old lady graduate of Julliard who came cheap.

Most were native New Yorkers, some bohemians, others used to different drummers and different beats, so Florence showing up without a winter coat was just one more detail to add when talking about the elderly piano teacher who made house calls.

Except for one family.  They were rich; they were powerful; they were used to seeing their name on different buildings throughout the city.  And an old lady showing up with a bag full of xeroxes and not wearing anything but a sweater and scarf was not part of their experience.

Which is why Florence began to receive winter coats every year from them.  Hating each and every one of these garments, she would, as the weather began to turn, grimly drag one on in fury and stomp off to teach this family's kids.  As soon as the lesson was over, she'd stomp home and the coat would stay in the closet until it was time for her to return.

At some point, the family stopped asking her to teach their kids.  Although she missed the money, not wearing the coat was liberating.  And, knowing that I did wear winter coats, she passed them on to me.

In the recent delight of wearing what I chose and living with what I wanted, not what was left behind or what had been accumulated, one of those coats needed to be reconsidered.  No matter how warm the coat was, Florence's history of going from home to home, laden with attempts at a livelihood while holding onto what was left of her soul and her life just left me chilled.

And as easily as it was for Florence to slip it off and be freed from it, I slipped the coat on the shoulders of an old friend and suddenly there was no history or sorrow.  Just a beautiful warm coat perfect for when the weather turns.