If Victor / Victoria Was A Diner... 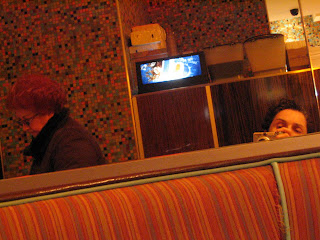 It's a diner pretending to be a restaurant pretending to be a diner. But everyone goes there. The cops with their cute tushies wiggle-waggling their guns and night sticks, the sober table of sober men murmuring and eating and sipping many coffee cups and then like Catholic boys at their first mixed dance, checking out any woman going to the bathroom, the two gay guys with great plates of fried foods (I thought the middle age one was cruising me until he reached over and tongue kissed his boyfriend for about five minutes), several fathers with enthusiastic little daughters ("I have NEVER in my ENTIRE life been here at night, Daddy.") and our table's favorite, especially after a long discussion of how Sophie Loren could have done that to her face, a woman probably as old as Sophie Loren, but with a face that still sings every moment of her life, framed by bright red, teased hair that still claims pride and delight in her girlish sense of style.
Posted by c.o. moed at 12:00 AM 0 comments