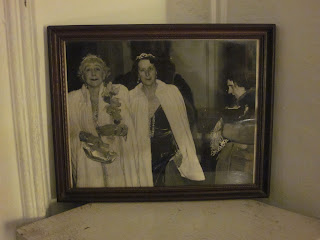 My sister and I never thought "oh that's art" as we passed it every day on our way to school or violin lessons or, in my case, jump rope.   Looking at those three women was  like looking at a family photo - as normal and intimate as maybe the way my friends with televisions looked at the Brady Bunch.

The only thought either of us had was "oh, is that Mommy?"  We were not talking the rich looking ladies there.

Later, after we stopped calling her Mommy, Florence would bitterly laugh as she recounted how we repeatedly asked her if that was her.  She also laughed bitterly about how people told her she looked like Katherine Hepburn.   Clearly, she had a couple of looks.

Finding out years later "The Critic" was, in fact, art was like finding out your favorite kindergarten teacher had found the cure for cancer (she didn't).   Or that your sweet, funny uncle was a brilliant rocket scientist (he actually was).

And then after that, I found out Weegee had, in fact, given Florence that picture himself.  Hard to get the straight story on it - there were several.
The only thing I ever really asked of Florence was to give me the picture when it was time to be given.  She was hiding decline, but knew something was up.

"No, it's yours and it belongs in your home.  Just put a note on the back of the picture."

On the untouched backing, still sealed as it had been when it was reframed probably in the 1950s, there's a pink stickie taped there that says 'This will belong to Claire'.

Sunday Memories: For My Sister's Birthday