In Memory of Cindy: The Land Of The Quartchyard

One year in the 1980s a newspaper representing the invisible New York called for submissions to a contest of autobiographies about living in New York. I wrote about the land of the quartchyard (which is how we said courtyard which is where we grew up).

Cindy was part of the story. On my way to deliver the story to the office - this was before email was invented - I ran into Cindy on the street. We walked the envelope together to the offices of the newspaper. On the way, we met one of my "uptown" (ie East Village) friends. I never was more proud as when I introduced Cindy to my friend.

I didn't win. They were wrong. The piece was recently accepted into an anthology about the Lower East Side. And tonight I got the news that Cindy just died. Days before her 52nd birthday. 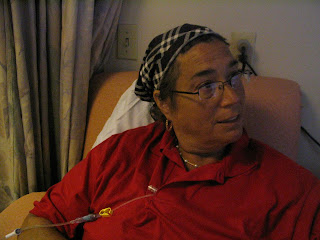 I grew up in the good part of a bad neighborhood. I thought we were rich. And, compared to others, we probably were. Rich meant a home that was warm, leak free, more than two rooms, in an apartment building with reasonably clean halls, and an elevator that ran almost all the time. Amalgamated Dwellings. My mother still lives there.

It was called the Courtyard but we pronounced it Quartchyard. I didn’t know I said it like that until my cousins from Philadelphia told me I did. I thought I was talking English like the rest of the world.

Amalgamated was built by garment union people. It was the first North American housing cooperative built in a European courtyard style. A graduate student of architecture told me that in one of those “I-know-NY-I’ve-lived-here-ten minutes” tone of voice. He did take a break from his throne when I told him I had grown up in that there North American European courtyard. The conversation ended when he started talking to me like I was a pushy Jewish woman looking for a husband because that’s what he knew from TV. Go figure these tourists.

Amalgamated may have been the first whatever in north wherever but for us it was nothing but housing we could own at money we could afford. It was working people. It was socialism in brick. It was a mansion compared to the slums in the neighborhood. Mrs. F. on the 6th floor said she remembered watching Amalgamated be built and the neighborhood just abuzz with talk because there was going to be INDOOR PLUMBING and ELEVATORS like “Park Avenue going up in the middle of the Lower East Side.” She told me she was practically fainting when she moved in later.

Gary from the D building grew up in the tougher city projects on the other side of the Williamsburg Bridge. He used to come to the archway of the courtyard and think, “This must be the Garden of Eden.” He really believed it was. When his family moved in, his mother would get him to behave by threatening to tell the management what a bad boy he was and how, if he didn’t straighten up and fly right, they’d have to move back to the city projects. Terrified the shit out of him.

There was a fountain in the middle of the courtyard. There were big gold fish there for a few years, but maybe they got stolen or the alley cats ate them. For many years there were many cats. They all had names. Skinny, Mikey (she had one eye and one kitten every year), Friendly, Kushka (which means cat in Russian). Then the Amalgamated security guard, Mr. H the Cop. who lived in the G building tried to get rid of them. All we got in return was no cats and more mice. He was a survivor, but of what no one told us kids. Marcy said there was a tattoo. I never saw it.

All the old ladies would sit in lawn chairs all around the courtyard. They’d talk about us in Yiddish. I counted on Marcy and Cindy to tell me what they were saying. After a while I just assumed they were saying bad things about me and my family. My parents’ Reform Judaism practically made us Catholics in their eyes. I didn’t wear skirts and went to music school on Shabbos. I also went to the public school on Broome Street. I socialized with goyim. I didn’t observe the high holy days for real. But the old ladies also thought it was nice my mother played such a beautiful piano and gave free lessons to some of the kids in the neighborhood. Now, most of them are dead and the few that are still alive all got memos from the new management. No sitting outside in their lawn chairs. Makes it look tacky and tacky isn’t good when you are trying to sell homes at market rate. The old ladies do it anyways. “Fuck ‘em,” one said. “We were here first.” She said it in Yiddish.

The courtyard had a lot of grass. The only time we got to go on the grass was when it snowed. The rest of the year we walked around it. It used to snow a lot in New York. Don’t get me started on how the kids today runaround like its their personal park. It’s so unfair.

My father would point to the center of the playground between East Broadway and Henry Street and say, “There were tenements there. My family lived there.” All I saw was basketball hoops and empty space. Then he’d point to the corner of Columbia and Grand and say, “That used to be the sweatshop that me and your uncle George worked, weaving baskets. The inspectors would come and we’d hide in the back because we were underage.” But I only saw a solid brick apartment building and bushes and trees. I tried imagining my dad and Uncle George hiding in the bushes. It’s not even called Columbia Street anymore.

My mother tells me a story. She lived in a tenement on Clinton and Division Street. It’s no longer there. There’s a shopping center there now. She lived on the second floor. A print shop was on the first floor and in the basement was the bialy bakery. The oven was built right into the wall. In the middle of the night the deliveryman would call down to the baker, “Hey Seymour.” In those days they were called kuchen, not bialies.

Years later, all the new apartment buildings took the place of tenements and Division Street never left Chinatown. The bialy bakery moved into fancy new digs on Grand and Essex as part of the modern shopping center. A toy store, supermarket, pharmacy the movie house, fabric store. All new.

And years after that, my mother walked into the not-so-new-anymore bialy store and asked, “Is there a Seymour here?” He recognized her. She, over 60 and he remembered the young girl who lived on the second floor of a tenement that doesn’t exist anymore. He asked if she lived in Greenwich Village. That’s because she doesn’t look like an old Jewish lady. She looks like teenager. That’s because she is.

He just died recently. Only my mother remembers the voice in the night calling him Hey Seymour. What’s left?

The south side of Delancey was filled with stores and people and music and Dave’s beauty parlor where my whole family got our hair cut. I stole my first thing from the newsstand between Clinton and Suffolk, a penny stick of gum. But my mother caught me and made me not only return it, but apologize to the man behind the counter. They razed everything in the 1960’s. There’s still nothing there. For the last forty years every Wednesday afternoon Dave goes around and cuts and styles people’s hair in their apartments.

The best meatball hero sandwich I ever had was on Grand between Pitt and Ridge, but now there are more apartment buildings, Ridge doesn’t live there anymore and I have to look at a map to remember. How many people still say Willet Street?

The toy store is now a donut factory and the donuts cost $2.50. Each. The movie house is a clinic. The grumpy old man who sold fruit by the bus stop is still there but nobody knows why. The bodega has been gutted to become another outpost of the hippest pizza parlor from the east village and the streets are filled with the kind of people growing up we never saw anywhere except on TV shows like Dynasty and the Brady Bunch and maybe Dick Van Dyke. And now Amalgamated is considered luxury housing with apartments going for almost One Million Dollars. If my parents were starting life over again, we couldn’t afforded to live there.

When we were eleven or maybe twelve, I snuck cigarettes with Cindy on the roof of our building, her cigarettes; I was just along for the ride. But it was me who got in trouble; me labeled a rough girl, a no-goodnik, a bad influence. That’s because I can’t read Hebrew and I didn’t go to Yeshiva.

But when I see Cindy today, both of us trying not to indulge anymore in bad habits, we hug hello not just because we still love each other very much, but because we understand what it means to work and live outside the courtyard. And my accent, my original language from a neighborhood of memory, my mother tongue of an illiterate Jews comes to mouth and for a moment I am home, in a home I thought was rich and compared to others probably still is.
Posted by c.o. moed at 12:01 AM 1 comments