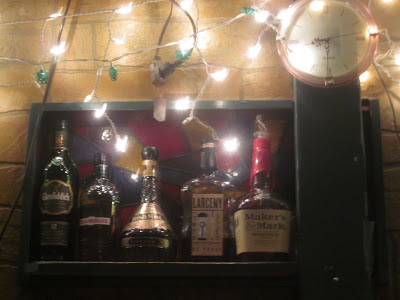 We all heard the news.  Developers had just bought East 14th Street and were going to raze everything, including the Blarney Cove.

I had passed the Cove for years.  Never went in.  I went to a dive on St. Marks until an unfortunate incident.  (Hint:  don't have a bad affair with the bartender of a bar you call home unless you don’t want to hang out there anymore.)

Besides, the Cove didn’t seem like a place for a girl like me.  Those guys were having shots at 8 in morning and I was too old for that kind of pissing contest.

I was also too broke for more than one round.  Not when for $5 more I could buy the bottle at the Astor Warehouse.

So, I'd pass the Cove and never go in. Even after the neighborhood blogger, Goggla told me it was great.  Even after I married a new drinking partner.

But suddenly it was now or never.  I said to the husband, let’s go to 14th Street.  We need socks and a couple of places sell a dozen for $6.99.  And then maybe after, the Cove for a drink.

We headed east but the further we got the worse things looked.  It was like Close Encounters of the Third Kind when Richard Dreyfuss slipped into the restricted area and saw all these dead cows.

Store after store were empty with 'For Rent' or 'Going Out Of Business' signs in the windows.  Even the cheap department store was gutted - 40 years of affordable shit, gone.

There was only one cheap stall left in the last remaining tenement.  The guy there told us the landlord had refused to sell to the developers, but eventually they'd win and buy the place – “they always do”, he said.  Meanwhile, he had a dozen socks for $5.00.

A couple of steps east was the Cove.  We peeked in and saw Christmas lights twinkling and a baseball game on both TVs.

They changed one of the TVs to the Mets vs the Marlins, we got Rolling Rocks in big-ass glasses because Pabst only came in tall boys, and the guy at the end of the bar played every baseball song on the jukebox for us, including one about being a Mets fan (which really should be categorized as a mental disorder) .

I asked the bartender when they were closing.  "End of June." she said.  "It's sad."

Then a couple of more regulars came in.  The bartender spoke to everyone, everyone spoke to everyone and I said to the husband, "Well, if we were not old hermetic writers who were always broke, this would be a good bar for us."

The 6th inning made it clear the Mets would lose.  Again. The beers were $3 each.

"Leave a big tip," I told the husband.

After all, they were closing and we weren’t going to get another chance before the end of June to say goodbye to a bar that, if we weren't too old, too broke, too hermetic, we'd go to.

The Bar: Part Two - I Call Your Name

Sunday Memories: Luck Of The Irish And A Couple Of Others