On the left:
Uncle George sitting at the feet of Seymour
at Camp Henry some summer in the 1930's. 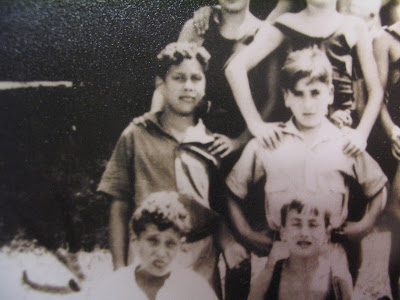 Henry Street Settlement's sleep-away camp must have been paradise to them, since they had spent most of their young lives on the Lower East Side either hoping not to get beaten or getting over getting beaten. 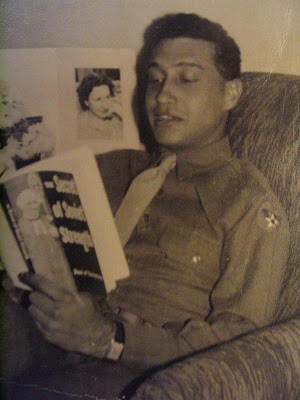 Seymour stayed behind in New York.  George briefly dated Florence and it's up in the air if she was madly in love with him or Seymour, but she married Seymour.  George, after his WWII stint headed out.  Got a couple of degrees including a PhD and eventually landed in California.

But his life, like Seymour's, was haunted by those beatings, the poverty, the misery, the rats, the going hungry, the witnessing of horrors inside the tenement, outside on the street.  His sunny suburb 3,000 miles away from where he had started couldn't keep ghosts away from his dreams, his waking hours, his happiness.  So, like Seymour, he kept keys in locks to keep from becoming the worst of his past. 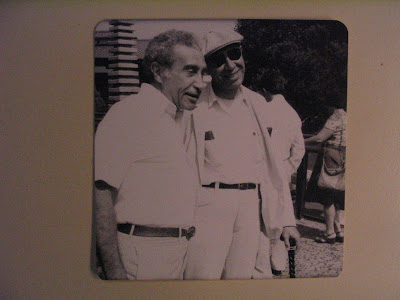 You can lock doors, but ghosts have a habit of slipping in through the cracks.

After rubble cleared and many things ended, there were small spaces of respite:  Seymour now retired and living in California, a third new marriage for George, tons of food, no rats, and their children finally grown and far away, not reminding the brothers that despite their best efforts and their heartfelt desires, they had failed to truly be different from whence they came.  Still, they had each other, company to keep in the midst of old echos from past battles.

And we, their daughters - sisters and cousins to one another - somehow rose from their lives and somehow built what they had maybe wished for during those summer days in Camp Henry.


Sunday Memories - It Was His New York


In Memory of Cindy: The Land Of The Quartchyard