At the End, There Is Nothing Left
Except Love

Jutta was in the hospital and it did not look good.

Pouring love into her exhausted hands praying for a reprieve did not bring a miracle. 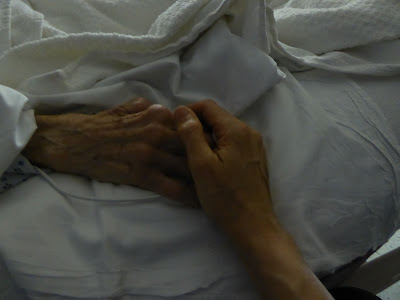 But it did bring love.

So begins a series of past posts honoring beloved and so missed Jutta Filippelli. Even after Jutta's 16 year old son Marc and 14 year old me stopped dating (if you call listening to Sibelius's violin concerto while holding hands "dating") I still found my way to her kitchen several times a week for years after.

Lots of times there was a gaggle around the small wooden table - me, Marc, the two Haitian brothers from down the street, the Korean prodigy alone in NY since he was like 12 and Chops the dog who had a blue eye and a brown eye. Whatever Jutta put on the table was a feast and the words and the laughter and the languages poured over meals and cigarettes and coffee and sometimes dessert.