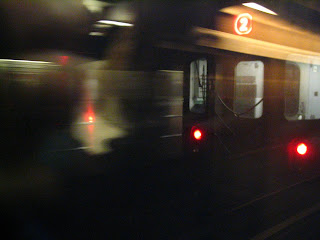 It was so cold and so late and so far uptown, too far uptown when it was that cold and that late.

Everyone did the precarious tipping over like a little teapot and stared down the dark tunnel hoping the IRT would zoom into sight because all our eyeballs were magnets and it couldn't resist the pull.

That's when I saw the MTA guy walking the tracks, swinging his lantern and flashing his flashlight.

He moved slow, scrutinizing every inch of all the metal and concrete and third rail and pools of floating garbage. Nothing broke his slow, steady stride, not even the rat running across his path in an attempt to avoid him. Behind him were three other men, also swinging lanterns and flashing flashlights and walking slow.

I got that sinking feeling of oh shit the way they're walking no train will be coming like forever.

Then in slow motion the first guy turned and waved his lantern.

Out of nowhere, a train had appeared.

All the guys strolled toward the pillars. The train tooted its horn.

"Hey, what are you looking for?" I asked.

He wasn't even near his pillar. Just stopped and gave me a long look. Then said, "Everything."

At his feet was the body of a dead rat lying in a pool of blood.

Another long look. The train was practically in the station. "Yeah. A lot of those."

And with that he disappeared into pillars and the blur of a train headed downtown.