Sunday Memories: These Are The Foods Of Our Gods 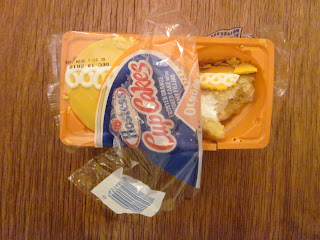 Twinkies may have been for the masses, but we only ate the orange cupcakes and the pink snoballs.  Once-a-week. Friday night.  At Gramma's house.   Watching TV.   With a C&C cola.

One of my sister's early memory was her, one Friday night, putting her foot down and saying she was going to have a whole packet of snoballs by herself.  No more splitting it with me.  Which was fine because that meant I got the orange cupcakes all to myself.

I continued to eat snoballs and orange cupcakes through way too many nights of loneliness, drunkenness and bad, bad TV.  Then I got a life, learned to love fruit and cardio workouts.  The foods of Gramma's fell by the wayside.

Years later, during a particularly gruesome series of doctor visits (that included Florence collapsing on a frigid winter street as we waved frantically at off-duty cabs) Louise ran out to get medicine while I stayed behind in the examination room.  She returns with the medicine and one packet of snoballs.   We shared them.

Then the news came that the factory was shutting down.

I hit every deli and supermarket I could.  But there wasn't a bright-pink-looks-like-a-tit or orange-frosting-as-pliable-as-gumby cake to be found.  Nobody had a thing, hadn't for a long time or didn't even know what I was talking about.

My city, in its quest for quality baked goods had filled its shelves with organic or gourmet ingredients, and had erased from its landscape recognizable foods.  Just as it had the bookstores, the mom&pops, the shoemakers, the bodegas, the services we needed, the stores we depended on, the neighbors we knew...

Finally, I went into a 7-11.  The woman behind the counter said, "you better hurry, we're almost out."

The minute I took a bite...

Sunday Memories: Where We All Now Live

Sunday Memories: Over the Hills and Through the Forest to Grandmother's House We Go

Sunday Memories: Our Version of Sitting On the Dock of the Bay

No, Next Week Is Bring Your Daughter To Work.  This week it's....