Sunday Memories: When We Could Still Cry In The Middle Of A Fist Fight 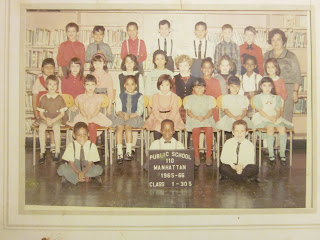 This was first grade.

Second grade you couldn't cry when punching the boy you liked who punched you first because you were teasing him too much in front of the other boys because you liked him so he had to take care of business and let you know he didn't like you even though you knew he did.

No, this was first grade. Where liking a boy wasn't on the table but teasing still was.

And when Mrs. F., the teacher chided you for being mean to one of the sweetest boys* in the class her words still held the blow of disappointment and shame for not being the best you could be. Hearts still sang with surprise and delight and tears still burst out and the squabbles of fists and words were easily healed with quiet words from teacher and a hug or a handshake between classmates.

*Mark S. where ever you are, I'm really, really sorry. I know I apologized in first grade and again many years later at the Avenue A bus stop on 14th Street, but I just wanted to let you know I meant it that second time. And I mean it now.