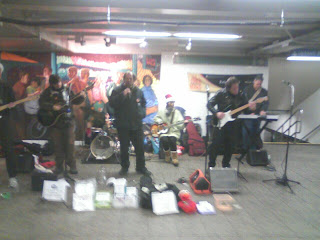 That section of the subway had always been a tunnel, rough concrete, bleak light and often empty except for those not lucky to have a home or another way to make the connection between the BMT and the IRT or IND. If you could get to the Port Authority another way you usually did.

Then they made Times Square pretty and that meant the subway too. Beautiful tile and picturesque murals. Even the bands got upgraded.

Saturday night, I had heard the strains of a band banging out Beatles drift down to the platform on my way uptown to another attempt of joviality.

On the way back down, I found myself in the now pretty tiled and brightly lit tunnel. There at the mouth was a motley crew of men and one woman crowded together, her in a Santa hat doing bass lines like nobody's business as the Beatles' A Day In The Life poured into space once too dismal to walk.

The words of suicide and desire and then that last chord never ending of both feelings followed all of us rushing to the BMT line.