Snapshots from A Field of Dreams 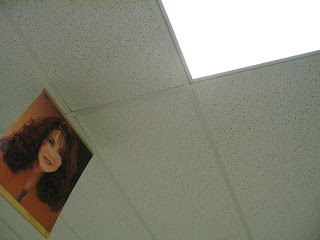 An Unidentified International School of Beauty Somewhere in Manhattan.

Taken on the sly while bending over backwards with my head in a sink since they don't allow photos in their football-size-florescent-lit-hair-dryers-from-the-first-cold-war-when-women-still-wore-curlers school.

*The gaggle of girls in beauty technician robes sauntering in, their own hair testaments to chemicals and zero-gravity laws.

*The head teacher repeatedly admonishing the students, "Stop talking to her! She's with a customer".  But that did nothing to stop the discussions about whether or not Miss _____ had the right to kick her out of class everyone knew the trains were all delayed because of the rain and why did she have to wait until November to take the State class that's so unfair.

*Teasing spraying cutting pinning and discussing who spoke English who was Korean who was Chinese who was Jewish who made their children do chores who was always cold who....

*Her plan:  not work out of her house.  Instead "go back to work in a salon because you're in, you're out, the kids aren't driving you crazy, it's unprofessional to yell at them when you have a client..."


(With thanks to the young woman who used her own personal product on my hair because it was better than the school's.)