Sunday In The Hall With Cat Boy 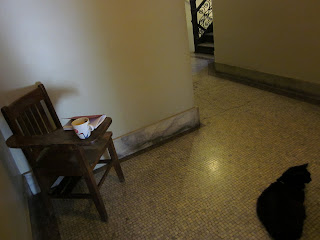 He's in love with the dog next door.

So his request to be let out often has less to do with climbing stairs and sniffing doorways than it does waiting patiently for Rags to take her afternoon constitution.

It isn't that Rags doesn't know he's alive. On the contrary, she does. She just doesn't understand his place in her world. He speaks a different alphabet and she is usually in a rush to inspect her favorite trees.

Still, he waits to gets a chance to march up to her and say hello before the elevator door opens causing him to retreat to safety. He has great hope and even greater determination. And his heart is even bigger than those two combined.