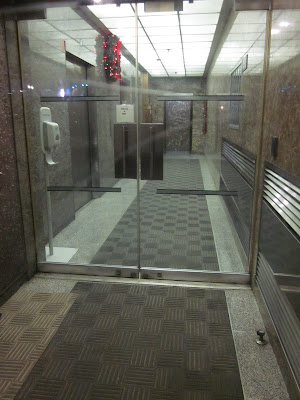 When a friend got knifed to death, I got off the messengering bike, put on a skirt, a real bra, clean shirt, snappy beret and hit the many employment agencies on Fifth Avenue in the forties.  It was too hard to pedal  in midtown traffic when everything hurt so much inside.

It was 1977 and entry-level jobs could be found if you showed up to plastic chaired florescent testing rooms with battered typewriters and sharpened pencils.  I found out I was good at adding and subtracting, but sloppy on accuracy when retyping the paragraph about the brown fox that was quick.

An index card with a company's name got pulled out, a call got made and I entered these doors to be interviewed by a man whose eyes never left my breasts.

Finally, off the housekeeping-housecleaning-bikemessengering-babysitting route, I got to sit down and sit still in order to make money.

The other night, Christmas in full bloom, wandering during a work recess of a job I sit down for, weaving in and out ice skating and cute shops, the Mariner and I bumped into these doors, barely unchanged from almost forty years ago.

So hard to remember one day to the next, the word winter, or the fact I had seen one of my favorite documentaries with a good friend.  But standing at these doors, I remembered the 8 a.m. hustle of many girls in many heels, much perfume, tons of makeup and me waiting to enter elevators that rode us to jobs we sat down for.