Sunday Memories: Part One: Cindy - That Day We Met

An on-going series about my friend, Cindy.
Because she is so much a part of the heart and soul of Her New York 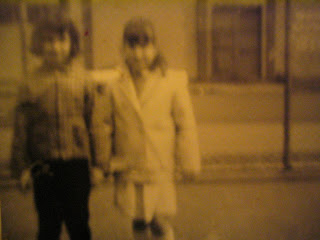 The Official Meeting happened when I was three, but Cindy and I must have passed each other in our respective carriages for years since she lived on the third floor and we lived on the fifth of the A Building in the Courtchyard.

She had several older sisters and I had one but I'm sure, judging from the wide gap in lifestyle our sisters did not play together. We were one second away from being considered gentile weirdos and they were Orthodox and, well, normal like the rest of the neighborhood.

In those days, either you got splinters from the old wood floors that had been there since the 1930s or you put down carpet or linoleum over all the wood. We didn't cover the wood.

And that's how, one day when I was three we met. The splinter must have been so deep and so large and my screams must have been so blood curdling, that Florence must have made a rare, and perhaps panicked, phone call because suddenly through my screams, I saw Cindy's mother appear in the bedroom doorway.

There was no way I would let her near me, especially in light of the very large needle she held, and my screaming wasn't diminishing because the pain of the splinter was growing.

Then Cindy stepped forward and thrust something into my hands.

It was a doll. A large girl doll and she was beautiful. I had never seen anything that extraordinary in my life. That's not what our parents spent money on. Clutching that doll, I let Cindy's mom remove a very large splinter.

All the cooing and caressing that follows serious operations followed. But all I did was clutch that wonderful doll.

But this was the Lower East Side in the 1960s. Because once everything was all over, Cindy stepped forward and before I knew it she took back her doll.

Maybe I wanted another crack at that doll but from that moment on we were fast friends.
Posted by c.o. moed at 12:01 AM 5 comments