Once Upon a Haunting... 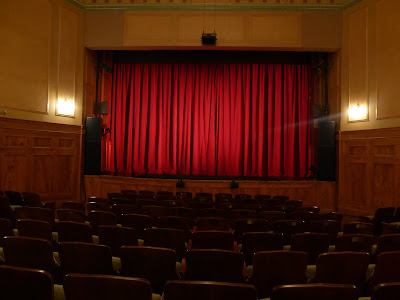 This was the row where we often sat for concerts of Florence's colleagues or some of our classmates or visiting artists or the student orchestra.  The minute the lights went down, my father and I would fall fast asleep.  Either out of exhaustion or an attempt to escape yet another enforced concert.

It was the theater that David wove a story of global mass destruction when, just as the lights went down and the Paper Bag Players began to perform, I told him I wanted to run downstairs to see if my friend was there.  I stayed in my seat.  Terrified.

It was also where I saw the last public performance Florence gave during the Henry Street Centennial celebrations.   She had such debilitating stage fright that she had to come out to the piano before they raised the curtain.

That moment, decades into a submerged career, became a haunting.  I never returned to the Playhouse after that.

Until... twenty years later,  Doug was cast as one of the ensemble in ONCE UPON A MATTRESS and of course they were performing at the now-historic Henry Street Playhouse...

...and who knew an unspeakable grief about my mother's art never taking full flight until the very end could be softened by the delight and joy of one of her favorite musicals.

ONCE UPON A MATTRESS - playing through January 4th at the Henry Street Playhouse.

ONCE UPON A MATTRESS TICKETS
Real-to-Reel

Sunday Memories: The Boy Next Door

New York Daily News: Once Upon A Mattress