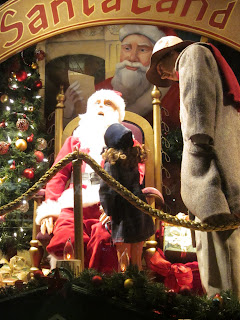 Why my Jewish parents did this or what they were thinking will forever remain a mystery.

Every year when the blinking lights went up and the store windows filled with moving animals, toys and people, my mother and father, my sister and me would leave the lower east side where nary a Christmas tree could be found and head to Macy's to look at all the Christmas decorations.

In those days, the corner window squeezed in between the Nedicks doors had a special Santa throne. We would wait in the freezing cold and then he'd suddenly appear out of the chimney or a beautifully wrapped box and the crowd would go wild as he waved through thick glass that blocked the sound of our cheering or his 'ho ho ho's.

He also lived on the 8th or 9th floor in Santaland. We may have visited him on more than one occasion but I only remember this one time.

I was in fifth grade and it was not going well. Especially math. I was worried. My father, I think, brought me up to Santaland which for some strange reason was almost deserted. I didn't quite get the "ask Santa for presents" deal. I knew it was my dad or my mom who produced the eight days of Chanukah presents. And our God which we never discussed was busy with plagues and lion dens and Israel.

I was kinda big to be climbing onto Santa's lap, but desperate times call for desperate acts. There was only one thing I really wanted that couldn't be gotten anywhere except from someone who made happy dreams come true.

I perched my ten year old self on his knee, and when he asked me what I wanted for Christmas, I told him. I want to pass math.

It recently occurred to me, 40 plus years later, that maybe he didn't hear many requests like that. At the time, it seemed perfectly reasonable. Passing math was beyond my own abilities, asking my parents for help was beyond theirs and our God was busy with more important things. It was going to have to be up to Santa.

As if it had already happened, he decreed, "You'll pass math."

And so it came to pass that when fifth grade ended many months later, I had passed math.