Sunday Memories: When A Picture Is Like A Song 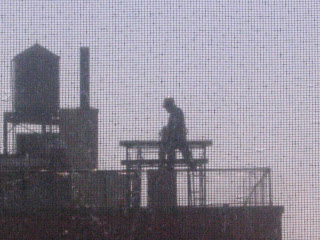 We were talking about how songs were haven for memories, sometimes so painful they couldn't be listened to for years. And smell, like when I walked into Florence's building and smelled the rice and beans of the apartment right by the elevator and, if it was shabbas, the competing chickens cooking from floor to floor.

Once a wind flooded me with memory. I had missed Autumn in New York one year and didn't realize until the following October when a wind embraced me and I remembered how much I had needed it around me. It was a memory of every Autumn I had ever lived in my hometown.

But pictures were less memories and more like stickies or little notes left to remind me of facts - a painting of childhood fairy tales, a photo by Weegee, a postcard sent by a friend reminding there was no excuse not to write.

And then opening this picture, I remembered not the facts that some guys were working on the roof across the street, but that the day was warm and the time was open and the air still hurt to breathe and I forced myself to move a defeated arm and, just like I had been taught, seek expression.