The Aftermath Dedicated To Florence 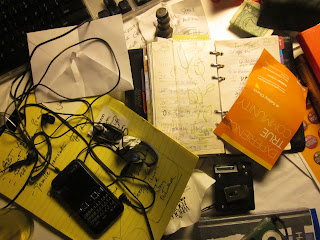 Florence always said "sitting down is half the battle."

I never really thought she was sharing, just instructing. Giving me another piece of artist theory like the sight singing she drilled me in or the ear training we did every day until I was a teenager with too much fury to cooperate.

But she wasn't just talking to me. She was talking to herself, cooing at her own terrors and reminding them that once that butt hit the chair the rest would show up. All she had to do was sit down.

"Half the battle is sitting down," I'd murmur to myself as I ran through the city day after day, too frightened to face packed pages while there were friends still awake and meals to eat and second-hand furniture to consider.

Sitting down then came deep in the night when the air was cooler, the streets were quieter and the desperation to not go a day without writing stronger than the desperation to run away. And once the butt hit the chair the rest showed up pouring out of moving fingers while piles of life were discarded or pushed away for other times when sitting was not such a joy.