Sunday Memories - For the Heart of the Building and the Sweetness of the Day: Stephen O'Haire (1959-2009) 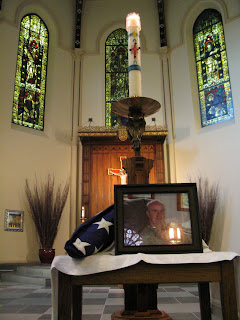 Stephen was living in the building with his Aunt Pat when I moved in in 1976. We were both 17. He went into the Navy but this was where he lived. And when he got out of the navy, this is where he lived. Ok, and sometimes he lived in Montauk but mostly he lived here and even when he wasn't living here, I still felt he still lived here.

He was our good morning, good afternoon, hello, anything you need, how's it going. He was the one who, after 9-11, put a little angel on the lamp between our front doors. He was a papa to his dog, Rags who became a star of Fox 5 TV because she could jump six feet straight up - like a yo-yo, only in the other direction. And one of Stephen's proudest boasts to me was that Rags won Fourth Place in the American Mutt Competition for Most Misbehaved.

No matter what his struggles and his victories were, he was a neighbor to each and every one of us.

With apologies to the incredible writers and reporters in his family and community, here are some moments from the mass at the Church of the Immaculate Conception on 14th Street and First Avenue.

Terry, his younger brother: (on being brought home from the hospital) "Joe, Jr. [older brother] said 'One peep out of you, we're going to throw you out into the snow.' Stephen bent down and kissed me on the forehead."

Terry: "He was the Bill Gates of our neighborhood [Flushing, Queens]. He did all these paper routes on his big Schwinn bike.

His aunt Kay: During the six years in the navy, whatever port they docked out, he'd buy an expensive gift to his mother back in Queens. "I asked him why he bought such expensive jewelry. He said he didn't have much time, but lots of money and he had to spend it quickly."

Terry: "He fell in and out of love hard. He felt both the joy and the sorrow of love. And when our mother was dying, he would sing to her."

Stephen had a Last Will and Testament. In it he left something for all of us:

"Have a great life and be happy. I am happy now."