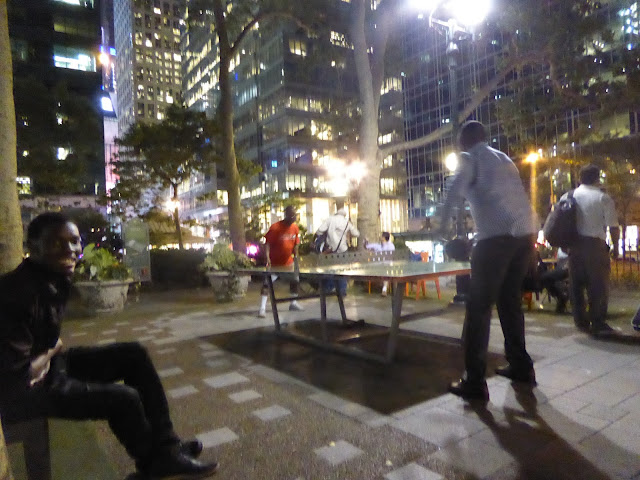 It was already a wonderful evening.  Incredible music and the perfect night air to stroll through.

Sauntering into Bryant Park, I marveled at the couples hanging about, the concession stand like a cafe in a French movie and all these folding chairs around for people to sit and enjoy.

(It always surprises me how you don't see people stealing them.)

Past a grove of trees, there was suddenly several ping pong tables and lots of guys with paddles lining the edges, waiting patiently.

Mr. Godwin is from Nigeria and if it wasn't for certain facts about certain things, he and his mother would be back there.  She had been a very successful milliner there.  But sometimes you gotta go where there is something more important that homeland.

Here in New York Mr. Godwin was getting ready to go to APEX to study automotive stuff.  Meanwhile, as he waited for school to start, he came to Bryant Park, signed up for ping pong and played all night for hours.

There was lots of running and dashing and jumping and slamming.

"I used to work on 40th Street many years ago.  There was no ping pong then,"  I told Mr. Godwin.

No indeed.  There was not much of anything.  Except a lot of bad, bad, bad people taking a break from crime, a lot of drugs, a lot of selling of drugs, and in the middle of this dangerous neighborhood, the deserted walking path between 40th where the office was and 42nd Street where an old bar served Happy Hour from 4 p.m. and 6 p.m. and had little hotdogs and other cute things to eat for dinner..

And at 4 p.m., especially on Thursdays and Fridays, all of us - all the young girls and every single one of the old broads, including Mary who was easily 60 or 70 - all of us would make a wild dash from one side of Bryant Park to the other.  For someone almost not quite five feet tall and about three feet wide, Mary ran fast.

There was no table, no ball, no paddles between our running from one spot to another.

And there was no Mr. Godwin, shyly beaming as he described how he worked hard to be an O.K. ping pong player.


Ghosts of Christmas Past