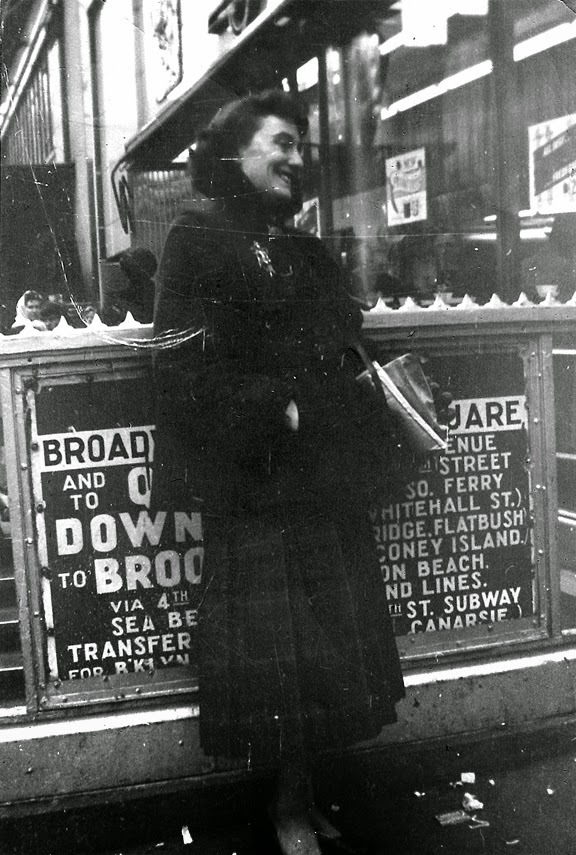 It's hard to keep track exactly when she died.

First day of Rosh Hoshonah for sure but every year that date changes.

But sometimes I think no it was October 1st because that's when I finally wrote everything down.

I don't miss her every day.  When her birthday comes around I remember it because it's right after Thanksgiving or before, and that holiday seemed invite a lot of unusual events.

But there are little things that startle me into a brief confusion over her absence.

Like when I hear an ambulance siren in the middle of the night from outside my bedroom window.  I am suddenly in that ambulance barreling my mother to her death, furious at the EMT who won't let me sit with her and staring into the empty, dark streets and then realizing that siren I hear is from the ambulance I'm sitting in.

When I understood that no one would ever hold my hand the way she did.

Or that moment on the F train.

And just the other day, I tied my scarf around my neck like she did and for a second I felt all the millions of time she rakishly made her scarves dashing and daring, with hopes that love would invite her into her hopes and dreams.

I often feel I should be mourning Florence's death the way I often felt I should fall in love with whoever gave me a Valentine's Day card.  There was just all this TV expectation that rose up.

But that's not what happened.  The day would arrive and I would have to remember what day it was exactly and ....

No.  That's not what happened or happens.  What I grieve is that the woman I became after her death was much more capable of loving her that the child I was before she died.  I could have really loved my mother in a way that truly reached her.

And for that I grieve.

Now reaching mid-way through my fifth decade, I've been to enough memorials to know that at some point, someone will say, "his or her spirit lives on in us" and then something about how we should go out and live as he or she did.

But, I don't know if anyone really does that.

Tonight, glancing back over my shoulder at the last couple of months and maybe even the last year, though, I realized I had been living as Florence did.  A ferocious attack on each day to bring forth the fullest expression of life, from dragging myself early in the morning to the pen and page, to storming up avenues to get to where I have to go.  I even swim at the same pool she did.

There is an unshakeable determination that I will not let age or despair thwart me.

That is truly reciting Yizkor for my mother.

"Tonight I Can Write The Saddest Line"

Visit To The Hospital: Part Two