Sunday Memories - "How Lovely To Be A Woman"* 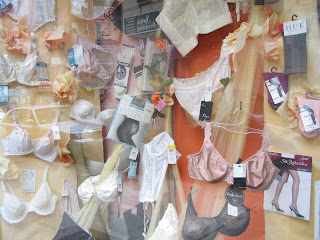 The competition to have breasts and a new bra to fit those breasts was fierce on Grand Street.

Of course, all my friends got their bras first, regardless of how far along their secondary sex characteristic were.   Finally, in desperation, I ripped every single one of my undershirts down the middle and insisted that my 12 year-old bosom had caused that destruction.

Florence reluctantly loosened her purse strings and sent me off to Grand and Orchard where the many dusty underwear stores, run almost exclusively by Hasid and Orthodox Jewish families, lined both sides of the street.  Everybody - the mothers, the fathers, the sisters, the brothers, the grandparents, the nephews, the cousins, the in-laws - everybody worked in those family stores.

Then, as now, the assessment of size was done in two ways. If it was a man who waited on you, a deceptively vague glance across your chest would pinpoint the right cup size within millionths of an inch. If it was a woman, sizing was much more hands on.

Entering Weiss Loungewear, I quickly walked past the men offering to help and went straight to one of the more grandmotherly women there.

Within seconds of describing what I wanted - and without any warning - the woman’s elderly, firm and intelligent hands grabbed what, up until that point, I had been able to grow in 12 years.

Then, just as quickly, the hands left my chest and pulled out a thin, white box from the hundreds of identical thin, white boxes that lined the entire wall.

A “training” bra appeared. I don't even think I tried it on.  I just watched it get packed up and Florence’s money disappear into a cash register.  Heading home, I was a bit bewildered by touch I had only experienced before by camp counselors and friends' uncles.  But, at least this time, I was carrying proof that I was now a woman.

A couple of years ago, in need of a bra that not only really fit, but also fulfilled certain vanity criteria, I returned to Orchard Street and to one of the last remaining dusty underwear stores.

Stepping into the familiar walls, stacked with hundreds of identical boxes, I was immediately met with that familiar vague glance across my chest by the young Hasid man at the counter.  And after barely telling the grandmotherly woman what I needed - and without any warning -  a pair of elderly, firm and intelligent hands grabbed what, up to this point, I had been able to grow over 50 years.
*BYE BYE BIRDIE

How Lovely To Be A Woman