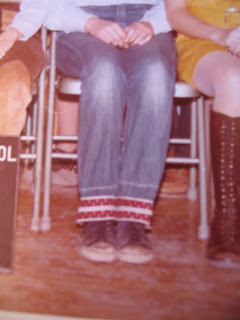 How the past new years eves were spent I have no idea. There were no celebrations in our home, no watching our parents dress up for some party and no loud horns blowing at midnight. In our neighborhood, new years was celebrated in the fall and the only horn that blew was the shofar at sunset announcing the new year had begun and the fast of the Day of Atonement could be broken.

Then it got even better. The brother and sister lived right by Central Park and there was going to be a rock band playing so we would even go dancing. Boys, dancing, new years eve. This all added up to one thing. Kissing.

Other than my insistence that Florence kiss me or my kissing my father good-bye in the morning, kissing-kissing was non-existent in my corner of the Lower East Side. However, Didi, a classmate who was also invited to the party had kissed. She dragged me into the girls bathroom of the 6th Avenue Horn and Hardart.

We practiced. Tilting one way and then the other always stopping inches away from one another. I was 13 years old. I was ready.

The parents were welcoming but the only thing that mattered were the boys. It began to rain as we headed to Central Park. I don't remember anything about the music except that it called all of us to dance and dance and dance in tons of puddles and the cute boy with the sweet smile was great to dance with.

What happened after that belongs to the fog that embraced me for years before and years after, surrounding any event that was overwhelming and too upsetting to me. But some vague details remain. There were some negotiations with the other boys and girls to allow cute boy and me kiss in the bedroom the boys were suppose to sleep in. And that first kiss and the couple we got in after were dazzling and breathtaking and I felt things I had never felt before and was really really enjoying myself when a tall lean and very angry parental figure appeared.

The party was over.