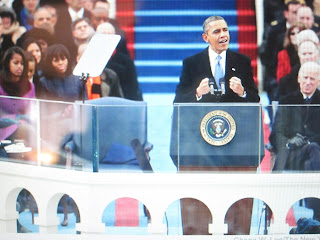 I was too busy standing up and singing along and being proud to be an American, included in that word like never before, to take a picture of the television.  This is from the New York Times.

On days like this, remembering that the promise of the Constitution wasn't just for some but for all of us, I miss Florence a lot.  She would have heard that this land was her land too, not just parts of the Village or a couple of friends' living rooms.

And on days like this, I wish my gramma and my bubby were here to see this.  They fled from the Old Country to the New World because of the promise of the Constitution.  They would have heard that the promise wasn't just words, but real lives thriving.

Look! A woman justice swearing in the Vice President!

Look! Us and all our family and friends and neighbors and co-workers in the crowd, on the podium, everywhere.  It's not just that scumbag Republican who gets to be there.  We do too!

Listen!  That's Brooklyn up there, where our families lived before moving to the lower east side, and that's our anthem, sung like it was meant to be sung!

But most of all,  my gramma and my bubby would have heard "Thank you".

The long road of their flight from that Old Country to this New World had not been in vain, even with the brutal poverty and horrible violence and crazy-ass people hating them because of what they were, not who they were.

They took that long road and, because of that, their granddaughter, standing up proud in front of the television, gets to live in a country that allows her the freedom to vote, to protest against the government, to own property if she can ever afford it, to practice the religion of her choice, to fight for change so the promise of the Constitution continues to be for all, not just some, and to love who she damn well feels like loving.


Tales From A Hard Day's Night: The Light At The End Of The...


Sunday Memories - Where We All Now Live