This Is Pat and Rags' New York 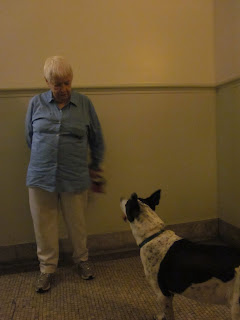 Pat and I have lived next door to one another since 1976. Rags moved in much later. She was Stephen's.

Jupiter is still in love with Rags but completely confused about it ever since Rags stopped ignoring him and started visiting us. So now Rags runs into the apartment, Jupiter runs away, Rags sniffs all the rooms, Jupiter runs after him, Rags eats all Jupiter's food, Jupiter watches, Rags runs out, Jupiter follows and then after Rags goes home or to the park, Jupiter sits at her door and sniffs for about an hour.

This is home and this is our New York.