Sunday Memories: His New York His California His Home - Christmas in July 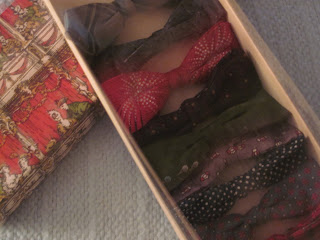 On one of the last summer nights there,  I took advantage of his distraction by a book of jokes he had read dozens of times.  Quickly opening drawers and closets, pulling out more dirty linens and clothes for yet another load of laundry, an unexpected box festooned with holiday cheer appeared.

There inside were all the bow ties he had worn to work, day in, day out, year after year, being a father, being a husband, being a provider, being an on-time employee, no matter what the heat or the cold or the rage or the loneliness brought.

When I got old enough to know my colors and tall enough to peer into his bureau's drawer, I got to pick out which one he'd wear that day.  I did that until I left home.  And he continued to wear them until that company, after twenty-five years, fired him.

He must of brought these bow ties to California, optimistic and hopeful there would be opportunities to wear them, maybe with joy, maybe in love, maybe toward happiness.

His New York His California His Home: Part Two-"One Step At A Time Dammit"