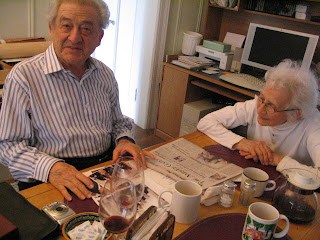 George and Jutta met when they were both quite young, just past teenage-hood but not by much. He was a Jewish refugee from Berlin via Palestine. He came to New York and stayed with his aunt, also a refugee. Jutta's family, Germans, welcomed the refugees into their home, 88th Street or 89th on the Upper West Side, then still a neighborhood of modest incomes and new immigrants. Friendships grew. When WWII started, he enlisted and was part of the troops that liberated a concentration camp.

Then Al Gore invented the internet. And one day, fifty years later, Jutta mentioned George's name and wondered if there was a way to find him on the computer. A half-hour search and these two old friends spoke to each other once again.