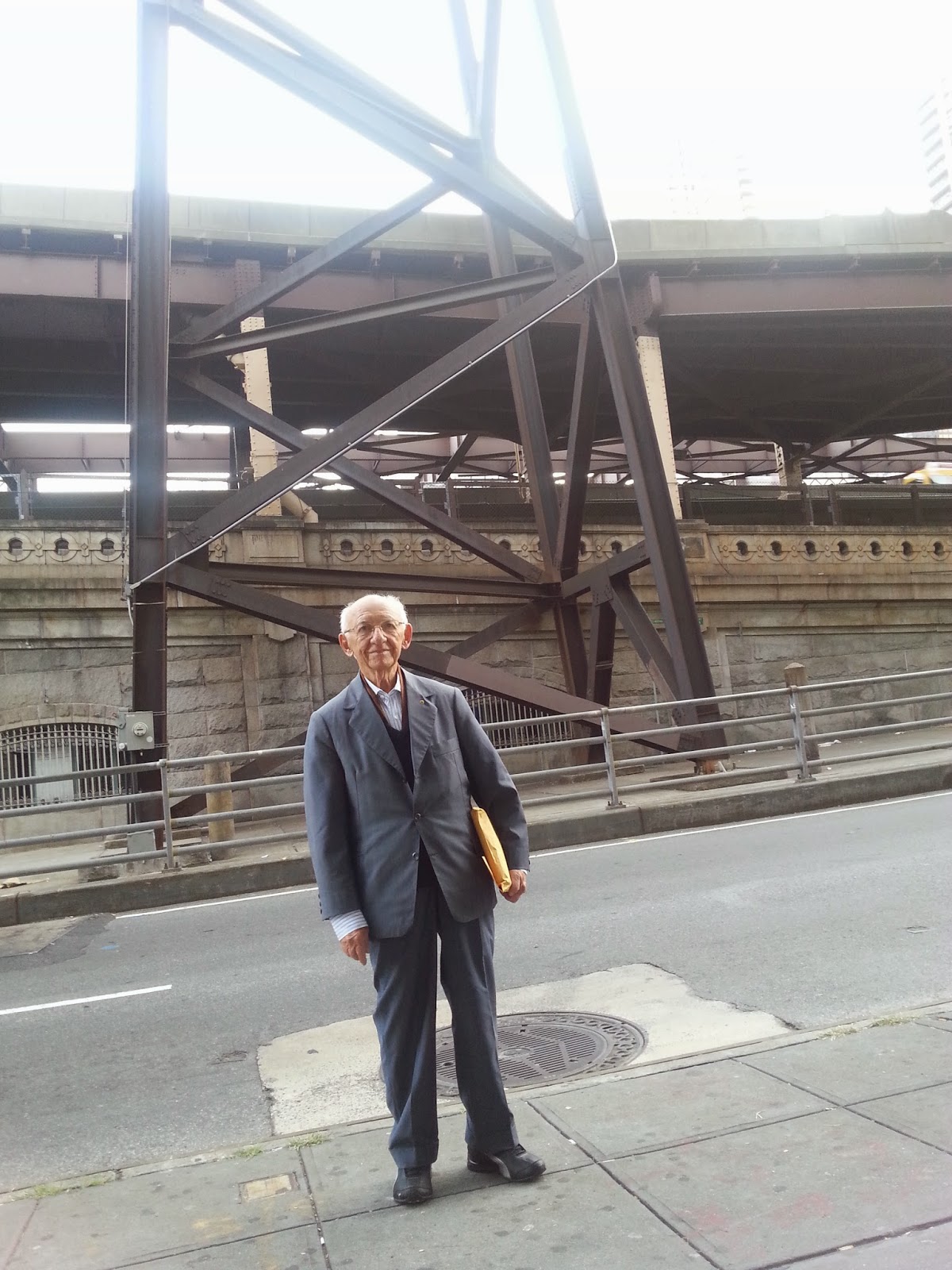 He is from Brazil.

Unlike our other meetings this one was planned.

Still, everything was just as surprising as that first meeting one day in 2011 running past him as he took a picture of a doorway.

And everything else was just as unexpected as that second meeting in 2013, when tearing around a corner, late as usual, I almost crashed into him standing there with his daughter and her son.

The Mariner asked, "What was your trade?"

And in unrushed time set aside, the story of Francisco's New York and all the other cities and countries he had traveled to, unfolded.  Dozens of places around the world, two daughters, decades long career.

Still,  where he returns, every year, once a year, is New York.

The memories of an 18 year old boy in 1947, leaving his country, disembarking a ship, stepping out of a cab, coming into his own...

...recounted in tender steps down old streets and, tonight, in words to new friends.

A MORNING AFTER ADDENDUM:

There are many things about Francisco that make New York this New York.

But, after weeks of long hours and a spectacular meal, an attempt late last night to describe that experience, even in a sweep of calligraphy, fell short.

The morning's "discussion" with the Mariner about transformation led to the challenge of describing the constant intersection between taking unfamiliar or uncomfortable action, and that all confusing term, "letting go" which sometimes means remembering that your lungs breathe in and breathe out without you yelling at them.

Here are some moments, some reflections on unfamiliar, uncomfortable action and letting my lungs do their job:

In 2011, I was running down the street to an appointment.

Rarely stopping when late, I stopped.
Rarely engaging and asking questions, I asked.
Rarely requesting a formal portrait since taking pictures surreptitiously was a habit, I requested. 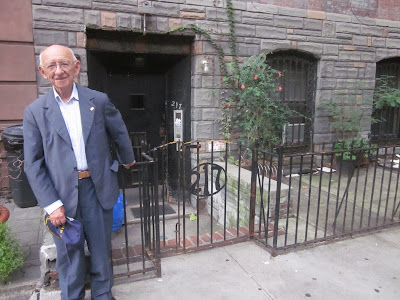 There was Francisco, with his daughter and grandson. 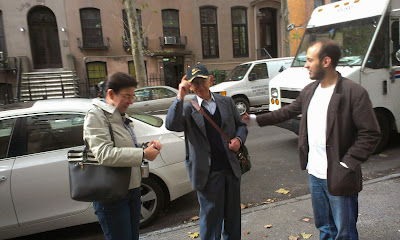 At the exact intersection of the perfect second and the next moment.  If I had been later or earlier by even a minute, I would have never seen him again.

These moments were part of a long line of moments Francisco had in this city.  He took a step and a breath and  behold it became His New York, from the moment he stepped out of a taxi at Union Square to the moment I stopped him years ago and asked to take his picture.

That happens to him all the time.  It has always been that way, his daughter told me.

There must be a grace that guides him, I said.

Perhaps that is all it is:  when unfamiliar or uncomfortable effort meets breathing that doesn't need a memo of understanding, Grace unfolds.

Seeking Florence's New York, or the New York of my family, my friends, my neighbors, my city, I often just take a walk, breathing in, breathing out, just watching.  And sometimes, I meet Francisco.

Now, we are all wondering this:  when he was released from Ellis Island and put in a taxi and taken arbitrarily to Union Square and stepped out of that taxi and ran into his former co-worker and asked about a place to stay, the friend took him back to his apartment that he shared with his father.   It was on Second Avenue.

Do you remember where, I asked Francisco.

No.  But it had an elevator.   And a cinema was right across the street.  And the friend then took him around the corner to the rooming house where he settled in and began his adventure into his life.

That building which I found him in front of in 2011 is right around the corner from my apartment.

There are only three buildings on Second Avenue and that street that have elevators, mine being one of them.

We all are across the street from the cinema.

Could it be the first place Francisco visited was the place I have lived in for almost forty years?

This was His New York, Her New York and now Our New York.
**
Related Posts:

Lightening Strikes Twice And It Becomes Deja Vue All Over Again!

Sometimes You Get To Go Back To Your New York

When Love Was Free

Spring Has Sprung Across America