Irene, mother of one, Lower East Side Girl through and through, remembers Her Orchard Street and Other Sundry Moments. 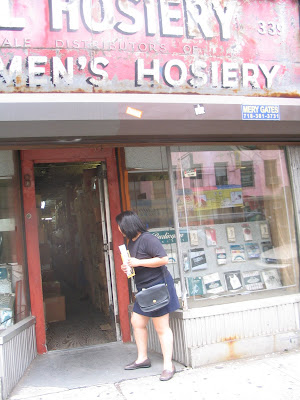 "I remember the ladders that rolled along the wall of shelves and the hair accessories all stapled outside on each box so you could really see all the barrettes and clips. Thousands of products, all the merchandise, all stapled on the outside of the boxes. You'd have to ask for what you wanted and they'd go get it for you.

When you were Chinese, they never paid you no mind until you were ready. And it wasn't like we were dressed nicely. We shopped on Orchard Street every other week. I don't know what my mother was buying.

I'll tell you what Orchard Street taught me. It taught me to negotiate. Those Jews didn't respect you if you didn't. If you didn't they were insulted. These days I don't bargain. There's no one there to bargain with.

My friends and I wandered the streets incessantly. People watched out for each other. My mother never worried. I wish my son had the freedom I had. He's eleven and can't cross the street by himself. He's starting now. He's starting on the bus.

But when I was 7 (second grade) and my brother was 4 (Pre-K), my mother put us on the 6 train to visit my aunt in the Bronx, a cruddy part, and no one questioned that. My brother and I walked to the Municipal Building and went under the turnstile. I don't think that my mother was lazy. She worked hard and needed some time to herself and did not care to spend five to seven hours in my aunt's hand laundry store. We were pesky and insistent so she relented and let us go. If I did that to my son, I'd be arrested. But I hear that from everyone, in Queens, here, everywhere. Kids are just not independent like we were.

And I confuse my friends because it's hard for them to understand how it could be so fantastic to have lived a less than idyllic life in the Lower East Side among projects, tenements, gangs, and having to watch your back. I laughed when I read about your asking your friend to put away his camera because he might get mugged. To this day when I sit in a restaurant I have to sit facing the door so that I can see who is coming in or if trouble is looming, something I learned in my youth that I cannot shake, even if I am in a fancy restaurant.

When you get older, and reach back into your memory, you don't remember vacations or trips. You remember the boring moments. My father worked six days a week, long, long hours. So I remember when on Sunday, his one day off, he'd join us because it was so rare. Everyone in Chinatown went to City Hall Park because it was green and beautiful. I remember the rare Sundays my father joined us in the park. I remember that, not the first vacation we took to Toronto when I was in my late teens.

My son has been everywhere, San Diego, Sanibel Island, Puerto Rico, the Caribbean Disney Land, everywhere. Soon, he'll be going to Costa Rica and probably China. You know what his favorite memories are? Bedtime, when we read stories."