Part Eight: A View From A Kitchen

A View From A Kitchen is a series on what meets our eye when we look up from our dirty dishes or half-full coffee cup. 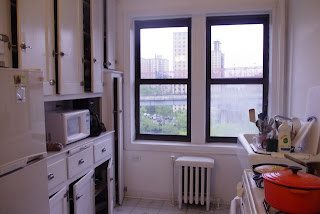 When I was ten or 11 years old, I became obsessed with the movie "Crossing Delancey." I'd never been to New York, and my only knowledge of the Lower East Side came from how it was portrayed in the film: as a gray, sooty place crowded with old Jews and handball courts. It didn't look particularly pretty, but it fascinated me, a kid growing up in the leafy confines of a Midwestern college town. Shortly after watching the movie, I drew a picture of a woman buying oranges from a neighborhood sidewalk vendor. She was dressed like the film's protagonist, but in my mind, she was me, or the me I someday hoped to be.

Shortly after I moved into my apartment, I realized that I'd moved into the picture I'd drawn over two decades earlier. I'm reminded of this every time I look out my kitchen window, which provides an unfettered view of the Williamsburg Bridge, the streets and trees that crowd below it, and the yellow brick towers that loom above it. That view places me unequivocally on the Lower East Side, and, as with the movie, allows me to observe New York through a heavily edited filter. I forecast the day's weather based upon the number of people on the bridge, know it's the Sabbath by the crowds of Hasidic families pushing strollers against an oncoming tide of fitness enthusiasts, and at night am reminded of the city's relentless, mysterious energy by the sight of the train rumbling to Brooklyn and back, lit up like an incandescent caterpillar against the darkening sky. On rainy days, the view from my kitchen window allows me to imagine I'm in a New York that otherwise only exists to me in Steiglitz photographs.

It is, in other words, my link to the past, both one that I never experienced and one in which I dreamed that my future would somehow be made in this city that at the time was as unreachable as a movie set, as alluring as tropical fruit glimpsed from a busy sidewalk.

*Post Script: Rebecca and Tim are the new eyes who look out the old windows of Florence's apartment. Those windows couldn't have been luckier.
Posted by c.o. moed at 12:01 AM 3 comments