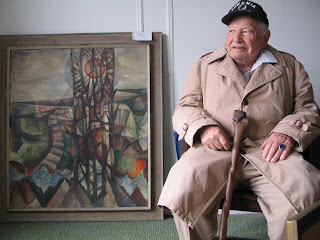 Signs in all the buildings started with "Furniture for Free..." and ended with "... a bit dusty." Most people come for the furniture and other sundry household and office items. But a couple of them come by to see what Florence had that they didn't have - maybe more rooms, more light, a better view of the Williamsburg Bridge.*

Hyman, still 91 or maybe now 92 years old, comes by to see if there's any furniture left, see if I'd take an old frame down to the garbage along with the all extra stuff left over, but mostly to talk about the broken front lobby door.

"A junkie did it! Only this building. It was a junkie. From the other side of the bridge." he insists.

"No, it was revenge against the board member who lives on the ** floor. That's why it's always this building." I was sure of it.

"Obama, but I don't like he wants to talk to Iran."

"Hyman, dialogue creates peace. War hasn't ever worked out." I don't know what happened in the POW camp he was in but his face goes far away. (OCTOBER, 2008: HYMAN)

"What if they don't wanna talk?" he shoots back

He changes the subject. They took all the furniture? Did we have any records or tapes? He liked music. I promise to bring him the jazz cassette tapes I had just taken home.

And for the first time ever, 50 years my family is in this building I go visit Hyman's home and see all his paintings, his real kaleidoscope and his many, many tapes of just about everyone.

He points to his kitchen sideboard. "Gotta paint that."

"Have Jimmy do that."

Later, I run into him coming back from a walk carrying a can of paint. Over the shoulder he says, "It was the fire department. They broke the lobby door."

*The painting that Hyman is sitting in front of is a 1950 painting of the Williamsburg Bridge.