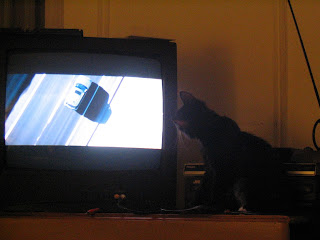 Although he went to public school, he was a good Jewish boy, which is why we had to wait until after Shabbos to go to the movies.

It was my first date ever and I suspect his too.

There was a double feature of James Bond movies playing at the Grand Street Loews (pronounced LO-EASES).   Having been schooled in Gene Kelly musicals, the height of my relationship to action flicks stopped at In Like Flint and the Pink Panther movies.

I don't remember which Bond ones we saw.  I do remember B. and Cindy following me and the good Jewish boy down Grand Street, shouting-singing "the closer you get, the better you look!"  That was from a Clairol Hair Dye TV commercial and the sexiest song they knew.  After "we must, we must, we must increase our bust, the bigger the better, the tighter the...".

I also remember the good Jewish boy feeding me Certs during intermission and me accepting as many as he offered because Certs was considered candy and candy was hard to come by until I figured out how to steal dollar bills from my dad.

Our post date reunion happened at the doorway of 7th grade homeroom where he presented me his baby teeth.  We went our separate ways after that.

But it didn't matter.  Bond movies weren't in my immediate future in those days.  Florence had other plans and sent me off to the Elgin Theater on Eighth Avenue when Eighth was the refuge for hookers not good enough for Times Square.  The Elgin was on its way to becoming a porn palace before transforming into the Joyce, but in the brief moment of still being an art house, I became one with Fellini and Truffaut.  Their movies unfolded a picture of the constant world inside my brain - a world I did not know how to say out loud in English, let alone Italian or French, but a world I so desperately wanted to live in.

James Bond's adventures movies were watched in between the Naked Gun movies - something to marvel at and get lost in wild stunts and other locales.  It wasn't until today that I found out those old Bond movies meant as much to little boys as Guido in 8 1/2 meant to me.  The Mariner, sitting me through Goldfinger, glowed and delighted with every gadget and "technological" advancement Bond used to thwart the bad guys and girls.  It was the unfolding of the world inside his brain, one any boy would so desperately want to live in and certainly one that would inspire a gift of baby teeth.

From That Moment One The World Was Different

Cindy: That Day We Met

Sunday Memories: The Truth And Nothing But...