"When fire and water are at war it is the fire that loses." - Spanish Proverb 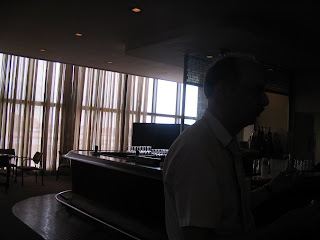 A story from my colleague about how a building made for world peace succeeded in unexpected ways:

The rooms in which countries meet soar with beauty and the ceilings and tables and chairs and wood walls all sing the best of intentions.

But during the cold war nothing, including breathtaking architecture, stemmed the shouting between adversaries.

Except at the bar.

There, my colleague recounted, one country stood at one end of the bar and the other country stood at the other end and in between their respective allies lined up. The shouting from the meeting rooms would continue as the bartender, knowing the exact drink for each person, would pour and deliver. And the more he poured the more the shouting "at" turned into shouting "with." The evening would end with drunk enemies making sure each other got home OK.

"In those days, things were very bad. I can't prove it, but I believe the reason the world didn't get blown up was because they all went to the bar after their meetings... These days, nobody does that. Nobody talks outside of the meeting rooms."

And on that note my colleague went off to get a cup of coffee.