Stepping Out And Then Stepping Into 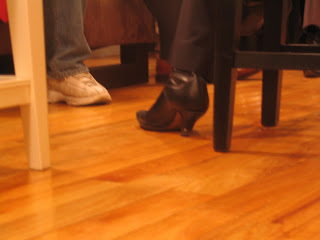 Other than the rare night when the world suddenly changed, recent news and politics and idealism lived in wireless waves. Perhaps it was my electronic version of Florence's life long love affair with the New York Times, but I sought information alone in front of a variety of screens.

Not sure how this happened, but several phone calls by young, earnest sounding people urged me out of my home and into an apartment on St. Marks place to meet a candidate running for something or other.

I couldn't catch the name and honestly didn't care but the adventure of seeing a stranger's apartment was tempting. Of course it also didn't stop me from considering that I might be walking into a dangerous situation so wearing boots I could fight or run in I headed out with just I.D. on me. Old school habits die slow.

There in a new building that piped Michael Jackson in the elevator, in an apartment with no windows because it was sub-subterranean (and I hope discounted heavily in the rent), a young woman in a fierce black but tailored pants suit told a small group of residents that she was running for Congress and wanted our support.

Reshima Saujani either answered questions bursting with concern (the younger ones) or listened to criticism tinged with nostalgia for the days when demonstrating meant something (the older ones). I offered condolences.

But win, lose or draw, to step out of one's comfort zone and into the fray - be it a stranger's apartment, love or politics - requires strength and courage. And for that, gratitude and thanks for leadership by example is offered.