What drives people to examine their society and question the status quo?

As events in France brought the French Revolution to its climax, many people, particularly members of the Church, the Monarchy and the Aristocracy, blamed the ideas of the Enlightenment on the turbulent events.

But our very own Republic, the United States of America, emerged in the last quarter of the 18th century because of Enlightenment ideas.

So what were these “powerful” ideas that coalesced over a century of trans-national discussions and debates? When Thomas Jefferson wrote, “We hold these truths to be self-evident that all men are created equal,” the fact was nothing could have been less evident. This idea would have been as foreign to the man standing behind the plow as to the man who called himself a lord or duke.

Jefferson was sending up a test balloon within his 18th century society. Given the current events in the United States, the hostility, the polarization and anger… I wonder whether Jefferson’s test balloon would have survived long. Today American policy often seems confused. So let’s review some of the key ideas from which modern European and American society emerged. It’s time for Americans to En-lighten-up! 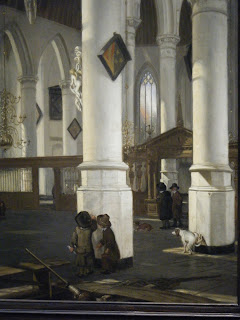 And what better place to start than with a 17th century Dutch masterpiece, painted in 1650, by Emanuel de Witte. As the title indicates “Interior of the Oude Kerk, Delft,” it portrays the interior of an old church, shortly after the signing of the Treaty of Westphalia. The scene celebrates Holland’s new-found freedom from Spain and Catholic rule. The bigger picture reveals that the Dutch had begun to define society in terms of the individual, and human achievement on earth. The emphasis was placed on science and commerce. It was now incumbent on each citizen to educate him or her self, and to participate in local politic. The Dutch participated in their society as equals.

Three separate scenes in this painting celebrate this spirit. First, this is a church yet there seems to be no opulent ceremonies. The space has been transformed into a town square. Two boys scribble graffiti on a column. Two men are engrossed in conversation, while a woman with a small child, holding a straw baskets, stops to greet a man. All the while, a dog is running and barking while the other dog stops, raises his leg near a column base and pees.

How does this scene encapsulate Enlightenment principles? Because, first and foremost, the focus is on the individual, individuals (men and woman) who were meeting together as equals, to discuss earthly matters. Information and education were now essential. Following these principles, the Dutch championed the free exchange of ideas within a State that was separate from the Church and became known for their freedom of speech and press. This, for the United Provinces and the first Republic on the continent was a golden time.

And so followed such a time for the United States of America and for France... and perhaps now for all countries throughout the world.


My parents were swept up in the events during the 1950's that led to Algerian independence from France. I was born in Paris in the late 1960’s.

My childhood was spent in Algiers during a time of great optimism when the country played host to all major third-world independence movements, including the Black Panthers from Oakland, California, and when there was faith that colonialism would end, poverty and racism would end, and that peoples all over the world would hold their destinies in their own hands.

A Brooklyn girl since teenagehood, I have a Master’s in Art History and a Master's in Modern European History with a special focus on understanding the ideas that brought about the French Revolution, the mother of all Revolutions.