I decided to try a new yoga class. Stepping into the room, I saw only one other young woman and she looked at least 35. Everyone else looked like 80.

This 9:00 a.m. class is going to be a snap, I thought to myself. Especially after the teacher said in her best kindergarten voice, "Class is starting. Class is starting," and everyone kept on gossiping and catching up on all the health problems they were all having.

Things began slow and easy enough. And I was feeling all smug and stuff when suddenly, like an army rising out of invisibility, thirty-odd women became a fierceness that only comes with the decades they earned. 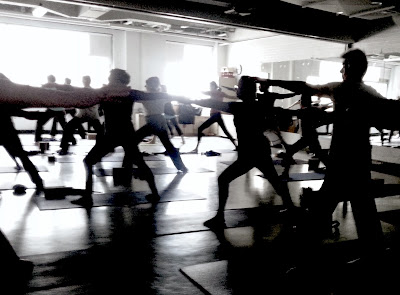 
These were warriors who fought battles never seen in Hollywood blockbusters or comic books.  I was barely keeping up.

Finally, the end of class was near.  The teacher, in her best kindergarten voice, asked, "Is there any pose you'd like to do?"

"Side plank," someone called out.

Are you fucking kidding me I quietly thought to myself? Side plank was what I watched skinny healthy 18-year-old girls straight out of athletic wear catalogs do on yoga DVDs.

"Me neither" I told her.

The teacher, in her best kindergarten voice, began instructing. And once again, an army of warriors, including that woman who just had a knee operation, emerged from my disbelief.
Posted by c.o. moed at 12:00 AM 2 comments