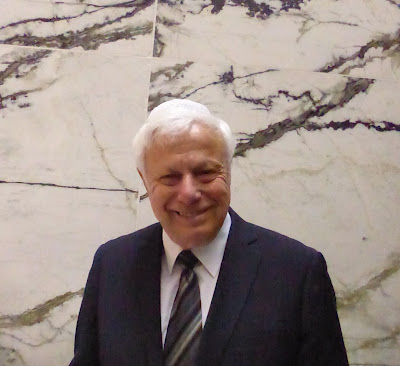 This is Rabbi Math.

And it's not like Rabbi Math knew me or my past or even that I included him in my past.  That's not how life-changing moments work.   They work when all a person is doing is their job...

It must have been the very early 1990s and times were lean.  Graduate school, student loans, part-time jobs all demanded only the essentials got paid for.  The rest had to be scrounged for.

Which is why I snuck into the Village Temple's Yom Kipper service at Cooper Union Square. Actually, it was pretty easy.  On the second day, people came and went so walking past the ticket table looking hungry was enough to snag a seat in the back.

I wasn't religious at all.  I wasn't even interested.  Still not.  But on the holiest of the holy and the highest of the high, at that time, not observing just felt too risky.

The evening program began and somewhere, in between the standing up and sitting down and my listening to prayers and songs I had no idea how to say or sing, Rabbi Math began talking.

He looked hungry. And he looked tired.  And there was, like, still an hour to go.

The light in the refrigerator had burnt out.

Rabbi Math stood there staring at the dark refrigerator completely bewildered. And then it dawned on him.

“Hineni.”  Rabbi Math told all of us, who five minutes earlier had wished it was dinner time but now sat still, listening.

It is what Moses answered, when, standing before the burning bush, he heard his name called.

That night, I wrote that down on a tiny piece of paper "Hineni" and stuck it on my bulletin board.

Twenty-five-odd years later, I had to write about what inspired me to face the page every day. There were precious sayings by several important people stuck on my bulletin board: Jean Cocteau; Frank Lloyd-Wright; Satyajit Ray.

But on the tiniest of paper scraps was the word, “Hineni.”

“Here I am,” said Moses to the burning bush.

Look Back In Love At Home