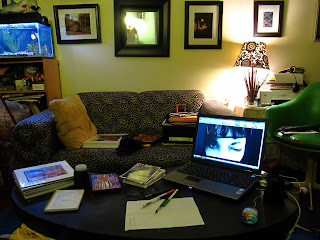 Goggla
(that's her on the computer screen)

So...I used to be a painter. That was back when I had a big apartment with room for a table, easel and natural light. Circumstances forced me to move into this smaller space, which was supposed to be for only two months. Those two months have stretched on for almost ten years.

Being in such a small space meant no room for setting up a work space for painting, so I started playing with my camera instead, which took up much less space, but still fulfilled my need to be artistic. These days, I'm 99% digital, but in the beginning, I used the bathroom for loading and exposing film.

This is a shared space, used by my partner during the day and me at night. There's only room for one person's project at a time, so when I need to print, cut mats or assemble pieces, he needs to go elsewhere. As there's not enough space to spread out, I work on one photo at a time. The real problem is storage, so I need to sell anything I make or there is not enough room to make more. The laundry cart functions as the mode of transport to the street or fairs, where I sell my work.

A few years ago, I began investigating the history of the building and that's when I grew very attached to the place - not because it has any significant past, but because it took me on a journey through the evolution of the city. With each new bit of history uncovered, I'd take my camera out to document my findings with the hopes of weaving together a visual story. Working out of the studio gives me a romantic connection to the roots of the Lower East Side where so many businesses were run out of tenements stuffed with families.

I grew up on the spacious west coast, truly believing the notion that NYC was the one place in the world where a young artist could come and make something out of nothing. I've lived in bigger and nicer apartments, but this is the one that connects me to the neighborhood and everything about it that I love; its history of entrepreneurship, activism, creativity and self-expression is what inspires me to get out of bed each morning. That, and the yowling of a hungry cat...