Sunday Memories and Secrets: Baby You Can Drive My Car 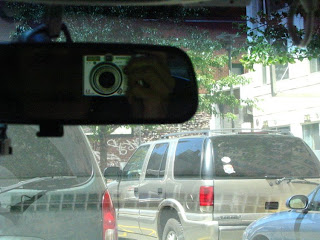 One day in my late thirties I decided to learn to drive. Again. For the third time in 25 years.

As with most developmental issues I was several decades behind the majority of Americans. I blamed it on the MTA and student loans. However, at some point your injury is your injury no matter whose fault it is and the fact I couldn't drive a car was no one's fault but my own. All other attempts to capture a license hadn't got well but this time I was highly motivated.

Love being the most powerful fuel with which one takes risks, there was of course a man involved. I had a fantasy of picking him up from the airport in a car after one of his movie shoots or trips home to Puerto Rico. Somehow if this little movie in my head came to fruition our relationship would be cemented in adult forever after. In the haze of hindsight, I see now I understood that he was about to leave me and that I would need to drive away from that life under my own steam.

Still, with great hope, I walked into the driving school that had always been on 10th Street for as long as I had always been on 2nd Avenue. There were a couple of instructors but the one I got was the owner. He somehow taught me to drive forward, turn left, turn right and understand red and green without vehicle murder. And as most people do when tootling around in a moving vehicle we got to talking. Life, liberty, love. Married, he had a daughter he was worried about. She wasn't growing.

Finally my $278.63 learn-to-drive packet was depleted and it was time to take the test (a story all on its own). I drove us both out through tunnels to the hills of Staten Island for the test. Somehow, still not quite getting parallel parking and managing to negotiate a sudden suburban setting surrounded by my city's skyline, I finished the route and was given my license.

The owner/teacher drove us back to the city. Our relationship was over. I wouldn't have to see him again and the little bubble inside his beat-up datsun would be no longer filled with our wonderings and hopes and dreams and questions.

Perhaps it was the intimacy within a moving vehicle or perhaps it was the knowing I was forever leaving and never to be seen again, or perhaps it's just the combination of both that engender men to confess something never before confessed. Sissy says it's the perfect storm - with their visceral attachment to cars, they don't have to look at you while they're talking - they get to do this manly thing at the same time they're doing this girly thing of breaking open a heart exhausted from carrying a secret no one knew was there.

We were suddenly hurtling down a very fast highway in rush hour traffic in I think Brooklyn when out of the blue he reached over to the glove compartment and pulled out a photo.

There he was in the same parka he was wearing now. A tall blond woman stood next to him. He loved her. He loved her like he never loved anyone. They were together for years and years and years. They traveled and skied and loved and redecorated and ate well and were and then one day he came home and she was packing up. She said to him, "It's over."

The owner/teacher turned to me and said, "I had to go teach a five hour safety course after she told me that. I had to park the car and go into my school and teach."

Still driving very fast, he put the picture back in the glove compartment and began talking about his daughter. She wasn't growing.

A couple of months later I walked down 10th street. The school was gone. The store front was for rent. Shortly after that, the man I was with left me.