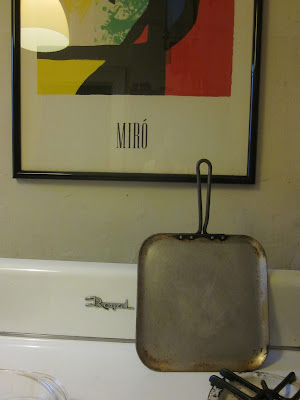 We were talking about the difference between men artists and women artists when Kosky said, "well, there's much more pressure on women socially."  He wasn't expected to show up or do things or be all available.  He could disappear or send his regrets or not even answer at all and no one would question it.  He was an artist and had important work to do.

I, on the other hand, had struggled for years to not answer the phone or not show up or not agree to help out.

I thought about that when I pulled out the old skillet this morning.  It was the one I had used several times a week during junior high school.  Home for lunch, I would whip up eggs, dunk in some bread, and fry away on the skillet while Florence kept practicing.  French toast was the only thing, besides a bologna sandwich, I knew how to cook for myself.

There was nothing unusual about any of this, until much, much later, when I repeatedly heard the anger and judgement about women who chose their vocation over the needs of others.

It made me think of Lucien Freud who was almost herald for his refusal to be part of the many families he created.   His children, at least according to one of his daughters, had to meet him on his terms if they wanted any connection with him.

Cooking up french toast this morning for the first time sine 1972, I thought about how Florence, despite a crippling civil war within, managed to reclaim small spaces in which she could be, not the words of Mom or Wife or Teacher, but herself.  I thought about how in order to save herself, she taught me as much as she could about self-sufficiency and then sent me out into the world quickly so that both of us could survive.

And so, we both did.


Sunday Memories - The Exhaustion of Diaspora: Part Seven - Try to Remember The Kind of September*


Summer Reruns During Brutal Writing Blocks: A Labor Of Love