a) Inheritance b) Neighborhood c) Heritage d) All Of The Above: Part 1 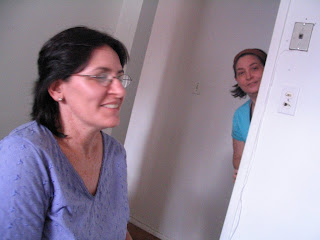 Their great-grandfather and grandfather had the stables down the street. They were the blacksmiths.  Laurel and Joyce say it like it is, no bullshit.  Maybe that came from the horses because you know you can’t bullshit a horse.

My grandfather taught himself English, showed up to whatever work he could get, despite suspected depression and was pro-union (although there's speculation it was just an excuse to be self-righteous and punch other people besides his wife and kids).  I think workers should be fairly paid for their work and I’ve shown up to every job I could get despite suspected depression.  Yeah, I got a temper but unlike my grandfather I keep it in check.

After the co-ops were built and the tenements disappeared, our families all got new fancy apartments near one another.  In our world fancy meant elevators, hot water, toilets inside the apartment, no rats and less roaches. Trees too.

(Dana's husband, George was one of the couple of men who got those co-ops built.)

Every once in a while, Dolly their mother would say "Let's go visit Florence" and they would come over and sit at the kitchen table, watching the trains going back and forth. Both of them knew the plaid "lumberjack" jacket from LL Bean and the Kedd sneakers Florence always wore.  No one in the neighborhood looked like her.  So it made sense they would remember.

They also knew we all walked everywhere.  Spending carfare was a very serious decision and if it wasn’t necessary then we didn’t.  And by necessary, I mean if the destination was less than an hour away by foot, the answer was no.  Even if it wasn’t, like Gramma’s, we had to walk back.

Laurel and Joyce still live in the old neighborhood that was built on top of the old-old neighborhood.  I come downtown for tea and talk.  As I walked in the door, Laurel said, "Betcha walked here."  Of course I did. And although I’m not wearing plaid, it’s clear to see from my sneakers to my jacket, I got Florence’s fashion sense.

Both of them point out the window to a new, ugly, blue high-rise rising on the other side of Delancey.  “Blue Smurf dick,” they both chortle.  Like I said, no bullshit.

Joyce reminds me they played with my hair during those visits.  I don’t remember.  But something inside me remembers more than what they did with my braids.  I will probably get details wrong and forget about dates and lose track of which family did what, but I don't get wrong the neighborhood.   Because, sitting at Laurel’s kitchen table, my lower east side accent returns full force and I talk like I was six and home again.

Inheritance. Neighborhood. Heritage.  All of the above.