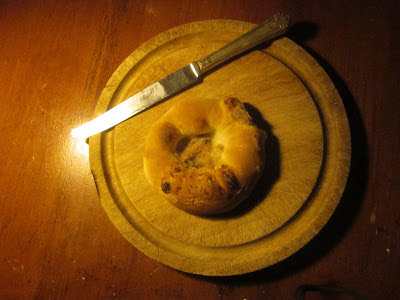 Both sides of the family have a long relationship with bialies.

My dad's family came from or through Bialystok on their way to the new world.  My dad and his brother, Uncle George were bar mitzvah'ed at the Bialystok Synagogue on Willet between Grand and Columbia.  They all ate bialies.

Florence grew up over Kossar's, the bialy store when it was still on Hester Street.  It moved around the corner to Grand when Dana's husband, George convinced everyone to trade the tenements for nice high-rises that had hot water and plumbing inside the apartments.   They all ate bialies too.

Kossars always closed for Shabbos.  So, during summertime, me, Cindy and B. would wait until sunset and then some, and then stroll down to the store on Grand and Essex and get the first hot, fresh bialies straight from the ovens.  It was - pre-breasts and boys - the highlight of our Saturday nights.

Come to think of it, it was - post-breasts and boys - still the highlight of our Saturday nights .

The store changed hands but the bialies didn't.  Ok, maybe a bit more doughy but the one time I complained to the counter guy they weren't cooked as much as they used to be, he yelled at me to toast them if I wanted them crunchier.

Then one day someone suggested I give up gluten.  She said that everything ailing me sounded more like gluten was the problem rather than early dementia, laziness or inferior genes.  I reluctantly said goodbye to most of what I loved and ate and things improved.

Bread, bread and butter, bread and gravy, bread and anything, pasta, more bread, cake, bagels and most of all, bialies became more and more relegated to the past.  However, so did all those annoying problems I thought were early dementia, laziness or inferior genes.

However, there are several ways to connect to one's well-being and one of them is the spiritual reunion with one's people and the past.  So, one night, late and tired, braving the cold, I took a trip to Kossar's and got a bialy.

And even though the next day was hell, that meal was the best of many, many meals over many, many months.

In Memory of Cindy: Land Of The Quartchyard

Sunday Memories:  From That Moment On The World Was Different

Guest Artist Dana:  The Gift That Kept On Giving